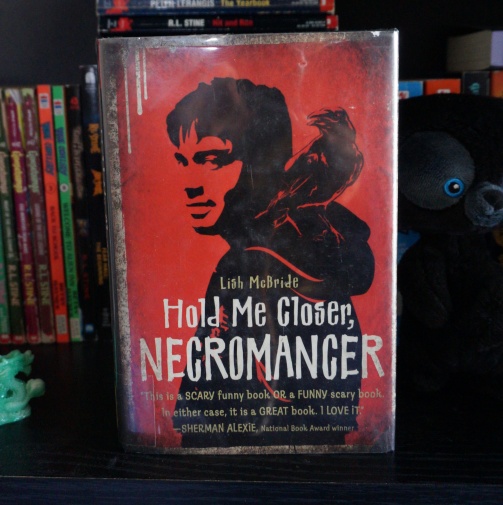 Sam leads a pretty normal life. He may not have the most exciting job in the world, but he’s doing all right—until a fast food prank brings him to the attention of Douglas, a creepy guy with an intense violent streak.

Turns out Douglas is a necromancer who raises the dead for cash and sees potential in Sam. Then Sam discovers he’s a necromancer too, but with strangely latent powers. And his worst nightmare wants to join forces . . . or else.

With only a week to figure things out, Sam needs all the help he can get. Luckily he lives in Seattle, which has nearly as many paranormal types as it does coffee places. But even with newfound friends, will Sam be able to save his skin?

This was most certainly a case of judging a book by it’s title. With a title like “Hold Me Closer, Necromancer”, I knew this was my kind of book. I was right! This book was awesome, funny, touching, and down-right exciting!

The humor in this book was quite good. It wasn’t over done and it was serious when it needed to be. I was quickly drawn to the characters due to their wit. However, as I read on I worried that was going to go on for the rest of the book. Teenagers, people, don’t talk like that. We’re not witty and charming all the time. Sure we have our moments, but not all the time. My worries were for naught as they soon started speaking like “normal” people.

The mythical creatures in this book were interesting and fun to read about. Though we don’t really have anything out of the ordinary when it comes to mythical creatures, the characters themselves were interesting and I wanted to know more about them. I believe there are only two books in this series, but I already wish it was longer! Even though the protagonist went through some character  development and the rest of the cast almost went through none, it was done in a way that it didn’t bother me. If anything, the potential for their characters and stories to develop in later books made me even more excited.

Did I learn anything? Did it make me think?

I think what I liked the most about this book was the friendship between the characters. I’m a sucker for a good friendship in books. I’ve been wanting to read a good story about friendship for a while, especially one where all the characters are equally important.

This book has it all.  It has humor, heart breaking moments, moments that keep you on the edge of your seat, secrets, a mystery, and friendship.