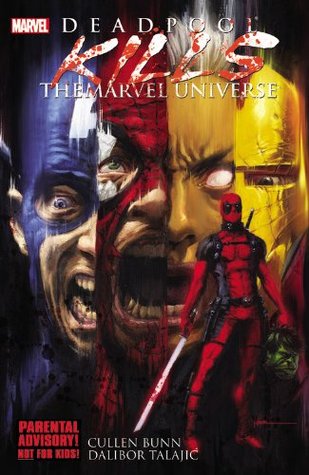 WELL THIS WAS SO MUCH FUN!

I’ve been enjoying a lot of Deadpool in my reads lately. Most of what I’ve read so far has been awesome! Probably the best thing about the Deadpool comics so far is that you can pick up pretty much anything and not feel too lost reading it. In fact, I read the 3rd volume of the Deadpool Killogy before reading this one and I was just fine. I didn’t feel like I was missing anything. I you might have guessed, I didn’t even know it was the 3rd volume in the series.

In Deadpool Kills the Marvel Universe (Deadpool Killogy #1) by Cullen Bunn (Author), Dalibor Talajić (Illustrator), due to some glossed-over events Deadpool realizes  that he’s just a character, that he’s not real, that none of the villains nor superheroes in his world are real. He realizes that all the never-ending pain and suffering  they all go through is for the entertainment of others. So takes it upon himself to end their suffering by killing everyone. EVERYONE.

I really wish this volume had been alone had been longer, they could have done so much more. I’m just glad I still have volume 2 to read.

(It’s red because that’s his color not ’cause I’m trying to be obnoxious.)